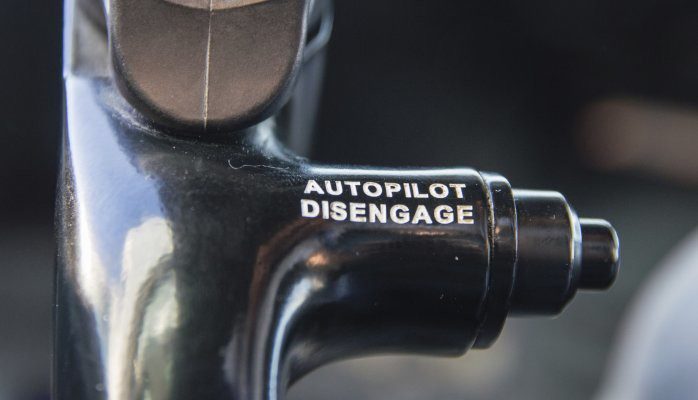 The value of taking yourself – and others – off autopilot

The day I interviewed Tom Hanks for the hit film Forrest Gump he did 64 back-to-back, five-minute television interviews at the Four Seasons Hotel in Beverly Hills. Although I was fortunate enough to be in the first group of 10, I knew if I was going to have a unique, memorable interaction with the Hollywood star I would have to be different, get him to put down his script, and take him off “autopilot.”

Well, research shows that from moment to moment, all of our brains are set to run on autopilot.

Autopilot and the brain

Autopilots serve important functions, in airplanes, spacecraft, marine vessels and now even somewhat more controversially, in cars. The system controls the path of the vehicle, whatever it is, without requiring constant manual control by a human operator, freeing us to focus on other broader aspects of operations.

The first aircraft autopilot was developed by Sperry Corporation in 1912. In the early days of aviation, aircraft required the continuous attention of a pilot to fly safely. After all, they were 100% in control of all aspects of the aircraft and flight.

However, as aircraft range increased, allowing flights of many hours, the constant attention led to serious fatigue. So, the autopilot made flying safer.

Autopilot in the human brain can work much the same way, taking care of simple tasks, and leaving bandwidth and energy for more important things. Here’s a quote from Daniel Bennett, at Australia’s University of Melbourne about autopilot and the brain. “Most of the information that our senses pick up is processed automatically; just a fraction of that information ever makes it into our conscious awareness. This makes our brains efficient, since it means we don’t have to pay conscious attention to everything at once. But it has the side effect that we can make decisions based on information of which we are not fully aware.”

What are the “side effects?” What are the ramifications for all of us as we try to move, persuade, convince and sell people, or even have unique interactions with them, when their brains are on autopilot, and ours are too for that matter?

Unconscious processes greatly control our consciousness according to well established research. Where we direct our attention, what we remember, what we filter out from the flood of stimuli that bombard us all day every day, how we interpret them, and even what ideas we have and what goals we pursue—all these result from automatic processes.

Timothy Wilson of the University of Virginia considers this reliance on the unconscious to be the price that we pay for survival as a species. If we were forced always to consider every aspect of the situation around us and were constantly weighing all our options about what to do, he says humankind would have died out long ago.

Okay, so the autopilot can literally be a brain saving mechanism, preventing us from wasting a lot of energy on mundane, routine and reoccurring tasks.

The autopilot working against us

But as much as it serves us, it’s also the reason we might miss out on new opportunities, new people, new ways of looking at things, new experiences.

It could be something as simple as an Uber ride, that opens up a unique interaction. I was going from the airport to a downtown hotel in Dallas for a speech I was giving at a conference and noticed a stack of books piled on the Uber driver’s front seat. I asked him about them, and he said he was working his way through the list of the 100 greatest books ever written. Then he asked me for my recommendation of awesome books to add to his list.

That segued to the podcasts he listens to, and the podcasts I listen to, and I thought he was going to run off the road when I told him I had a podcast. I assured him it wasn’t that big of a deal, and that it’s quote “pretty easy to have your own podcast.” However, he was proud and excited that I was the first podcaster he had ever given a ride to, and I didn’t want to extinguish his excitement. There had to be others though, right? He just never knew about it. And that’s kind of the point. We all have really interesting people in our paths each and every day but we don’t even know about it. We’re denied some enriching experiences because we’re all on autopilot so much. When you take your brain off autopilot, and truly see the world – and the people in it with wide open eyes – a whole new world can open up to us.

One of my first 3 Second Selling™ sales training clients was a VP at a nationally known corporation that specializes in tax-qualified retirement plans. He had a spreadsheet with 700 warm, qualified leads on it, and spends a fair portion of his day working through that list via a combination of emails and phone calls. When I asked to sit in his office while he made some of those calls, I was astonished at how rote and robotic he sounded. He didn’t vary his script at all, but rather just left voicemail after voicemail wanting to know if he could “share some news” that might impact this person’s retirement planning.

The truth is he wasn’t working very hard to pique the curiosity of his prospects, to arouse their brains, to be different, to give a hint that he truly had something of value to offer and deserved to earn someone’s time and attention. People can hear in your voice whether you are genuinely excited about sharing something, or just following a script, literally or figuratively. Especially if you are trying to sell them something.

I asked him if he was in fact “bored” by this activity and he admitted he was. I told him if he wasn’t excited and showed no urgency around what he had to say – or sell – his prospects wouldn’t respond with any either. We all follow scripts in our daily lives, interaction by interaction, playing out preconceived notions of how we think something is supposed to go. We have to be diligent and deliberate to overcome that.

Tom Hanks told me if he sounds as if he is on autopilot during press interviews it’s because he says he gets asked “the same five questions by every interviewer in every country.” And baseball great Derek Jeter told some sportswriters in response to criticisms he received about being a boring interview, “Ask me better questions and I’ll give you better answers.”

I once had the chance to spend time with some sales rookies, newly hired insurance sales people right at the front end of their training. It was immediately apparent these new reps were getting more results from their phone appointment setting efforts than the veteran I worked with who had spent decades in sales. Why? Because they didn’t use the same pitch every time. They mixed it up. They tried different things, sometimes even just different ways of saying basically the same thing. And because it felt so new and fresh to them, and they were excited and enthusiastic and also sincere, it got the attention of the prospects.

“Wait a minute, this sales person actually sounds authentic, like they want to have a unique, original conversation with me.” And that kind of reaction, that kind of emotional connection, puts you well down the path to becoming someone people know, like and trust. And that is who we do business with.

Most sales people probably approach their calls with a script that sounds too familiar, and that virtually everyone is using. In turn, our prospects are also often following a script where they are simply looking to interject something mid-spiel, and end the call with one of the following responses:

• We’re happy with the status quo.

• We’re not looking to make a change right now.

• Check back later when we might be ready to consider new options. Both parties are on autopilot; the sales professional and the prospect.

The long-established historical protocol for selling has long been dead. People don’t need us any longer for the most part to simply tell them about our products and services. Your audience knows far more about you than they used to, and the first time you actually have a conversation with them they are likely more than halfway through the sales process.

People don’t need my client to tell them about the importance of retirement planning, or any other “features” and “specifications” of his product or service. So your relationship has to involve more than just being a purveyor of information.

To cut through today’s buying clutter, you need to have an authentic, unique and memorable interaction, create emotional connections quickly, and lay a solid sales-forward foundation. So be deliberate, planful and mindful about your interactions and what you say to people, either face-to-face or in your sales and marketing messages. Put down your script. Disengage your autopilot. And more times than not, your audience will do the same.

And what, you might be wondering, did I ask Tom Hanks to get him to put down his script during my interview with him for Forrest Gump?

“Trace the line from Bosom Buddies _and _Bachelor Party and Volunteers and Turner & Hooch and Joe Versus the Volcano to A League of Their Own, Philadelphia and now Forrest Gump.”

His response, which by the way applies to all of us; “It’s all about who you put in with.” He went on to say that while he certainly improved as an actor, he wasn’t as bad as people said he was in some of those early things, and wasn’t as good as they said he was in these later projects.

“Making movies in Hollywood is a collaborative endeavor, and you’re only going to be as good as the people you surround yourself with.”

An original, unique, authentic, unscripted moment between two people who were actively engaged, and who had disengaged the autopilot.